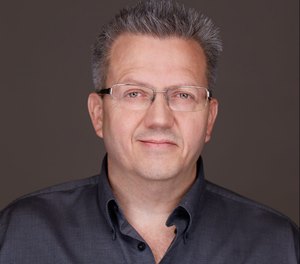 Having worked in positions ranging from stock boy to chief operating officer for a major metropolitan EMS authority to senior manager with a public safety communications software company, Todd Stout had a vision when he started FirstWatch 20 years ago. Computer-aided dispatch systems were growing increasingly more sophisticated, meaning more detailed 911 data was being captured. At the same time, expectations for what public safety, fire and EMS should deliver were growing. Todd — with his experience as an EMS practitioner and manager, and his expertise in data mining and public safety computer systems — saw the potential for a new firm that would harness information technology to help customers in public safety make better and more efficient use of their resources to improve emergency care and safety.

In 1998, Todd founded Stout Solutions, which became FirstWatch in 2002. From its first customers — MAST in Kansas City, Mo. (now Kansas City Fire Department) and Richmond (Va.) Ambulance Authority — FirstWatch has grown to a company that serves more than 400 agencies throughout North America. Initially focusing on the real-time biosurveillance of weapons of mass destruction or outbreaks of SARS, H1N1 and other potential pandemics, FirstWatch has transformed itself into an organization that finds ways to improve operational performance and efficiency — from reducing hospital drop times to identifying crime trends — and many other issues facing public safety and EMS.

Todd’s roots in public safety run deep. His father was Jack Stout, an innovative and influential pioneer in the design of high-performance EMS systems. Todd got his start as working as a stock boy at Medevac MidAmerica and MAST in Kansas City. He later became an EMT, paramedic and flight medic. After working as a consultant on EMS systems design for his father’s firm, The 4th Party, Todd was brought on as vice president and chief operating officer at Oklahoma City Emergency Medical Services Authority (EMSA). He has also held positions as director of business development for LifeFleet Ambulance in Irvine, Calif., and was a senior manager for TriTech Software Systems in San Diego.

When working with customers, Todd believes in a collaborative relationship built on a commitment to understanding the customer’s needs, and sharing best practices that improve the entire EMS and public safety system. “The professionals who work in EMS and public safety are trying to do the right thing, every day. Our job is to help them succeed,” Todd says.

“Gut feeling will always matter in public safety and EMS. Never underestimate that. But you have to fine-tune it and prioritize when making decisions, and the only way to do that is by looking at the information. We make sure decision-makers have that information anywhere and anytime, in an easily understandable way.”

Todd is active in the profession, is a member of many associations, including the International Association of EMS Chiefs (IAEMSC), a member of and served on the board of the National EMS Management Association (NEMSMA), and on the CBRN Committee of the International Academies of Emergency Dispatch (IAED). He also volunteers his time with the Paramedic Chiefs of Canada, and other EMS and Public Health groups.

Outside of work, Todd enjoys time with his partner, Jenny, reading, working on projects around the house, and spending as much time with his adult kids as they can stand. His daughter is a chef in Colorado and when she’s not cooking, she loves skiing and hiking. His son and his partner train horses, and have their own business in California.

“Truly an innovative leader, for an innovative team! Because Todd’s EMS & public safety software career has had so many facets of success, he brings a rare combination of real-world experience (and perspective) that is the driving inspiration behind our “Can-Do” FirstWatch team mantra! Part of Todd’s personal mission statement is creating success stories for not only our amazing FirstWatch team members, but our FirstWatch customers as well!”