The CDC reported that flu activity (diagnosed flu and ILI outpatient visits) is high in all regions of the US and is continuing to increase.  It has been elevated for eight (8) weeks now, longer at this time point than in most previous seasons.  It is also important to note that Flu/ILI might be underreported for this time period because of the holidays and less people going for outpatient/doctor office visits.  The complication rate may also be higher, when compared to other reporting periods, since the number of those diagnosed with flu may be skewed lower and show a higher rate of complications in comparison to the overall number diagnosed, since those with complications are more likely to have to seek medical care. The chart below is displaying the number of ILI cases reported by ILINet for this flu season, as well as other specific recent ones, for comparison.  Please note that the only year that shows an earlier start than this year (the red line) is the year of the 2009/10 Pandemic Flu (the silver line).  Also of interest is how early this season crosses the national baseline compared to other seasons, and how almost straight up the trajectory is with no sense that the cases will level off any time soon.  The hope has to be that we don’t combine the case rates seen during the 2009/10 (silver) and 2017/18 (aqua) seasons with the extraordinary and record setting length of last year’s season (purple). 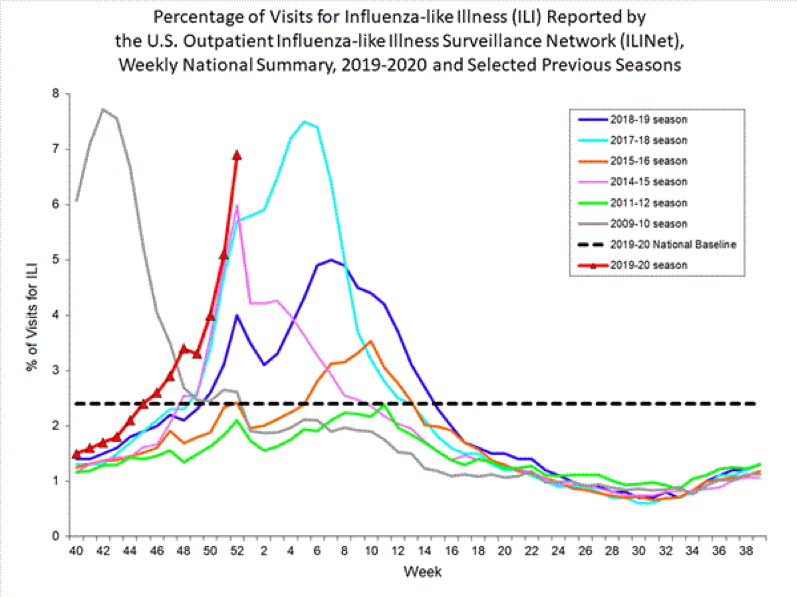 Nationally, most of the current flu activity is caused by Influenza B/Victoria which typically occurs in late Winter or Spring, nearer the end of the flu season, and often seems to hit the pediatric population particularly hard.  A(H1N1) comes in next, with A(H3N2) and B/Yamagata circulating with much lower levels of flu.  The predominant flu virus varies by both age and region.

The CDC estimated that at this point in the season, there have been at least 6.4 million sick with flu, 55,000 hospitalizations, and 2,900 deaths. Influenza-like illness (ILI) is defined as a temperature at/above 100o F [37.8o C] and cough and/or sore throat without a known cause other than flu.  A Flu case, that is included in CDC data, indicates a positive flu test read by either a Clinical or Public Health Lab.

Diagnosed Flu and ILI are expected to continue to increase over the next few weeks and flu activity is likely to persist for several more months. It is recommended by public health officials & health care providers, that for all those 6 months or older, flu vaccinations be completed ASAP unless there is a valid medical contraindication. Most will receive a vaccination that covers 4 strains of influenza.  See this link for more details, including charts, graphs, and maps: https://www.cdc.gov/flu/weekly/index.htm

For the most recently reported week ending December 28, 2019, the CDC reported:

–ILI visits to clinics and other non-hospital facilities was at 6.9% and above the national baseline of 2.4%.  The regional range was between 3.8% and 13.9% for Week #52.  All ten regions reported that outpatient visits for ILI were at/above their own regional baselines.

–Flu cases, documented by positive flu tests from Clinical Labs, showed that 26.3% of respiratory specimens tested for influenza were positive, which is higher than last week’s report of 23%.

–Clinical Labs, which test many specimens to determine whether flu cases are increasing, decreasing, or staying stable, as well as a simple breakdown of A and B flu percentages, reported that of the 26.3% positive flu specimens, 67.9% were influenza B and 32.1% influenza A.

–Public Health Labs report data using a more limited number of specimens but provide a more specific breakdown of specific flu virus strains.  Influenza B was detected at 59.6% and Influenza A at 40.4%.  Further breakdown revealed that Influenza B showed 99.6% Victoria lineage and 0.4% Yamagata, while H1N1 is the dominant A with 91.3% with H3N2 at 8.7%.

–Antiviral Resistance:  At this time, >99% of the flu samples are susceptible to the four antivirals currently marketed for flu.  This is particularly important for those at increased risk for complications from flu or with signs of severe flu.  It is also important to start the antiviral as soon as flu symptoms appear.  Consult your Health Care Provider to see if antivirals might be appropriate for you or someone in your family.

–Vaccine Coverage:  Testing of influenza A(H1N1)pdm09 samples revealed that all samples tested were well matched with the components in the 2019-20 flu vaccine, while only 34.1% of the the A(H3N2) influenza virus samples were matched; 58% of B/Victoria virus samples were a similar match but B/Yamagata samples matched 100%. Unfortunately, it is the B/Victoria that is currently dominant nationally although specific areas or regions may differ.  A more comprehensive report on vaccine effectiveness will be posted by the CDC at a later date and will provide a more complete picture of vaccine coverage of this year circulating flu strains.

Death rates for pneumonia & influenza in adults:  from data as of 1/2/20, 5.5% of adult deaths during week #51 (ending 12/21) were associated with influenza and pneumonia.  This is below the epidemic threshold of 6.8% for that week.  This data reporting typically lags a week or more behind the reporting week and data may be even slower than normal because of the holidays.

Five (5) pediatric deaths associated with influenza were reported during week #52 but occurred in weeks #50 and #51.  Two (2) of the cases were influenza B and only two had lineage tested with both those being B/Victoria; three (3) were typed as influenza A.  A total of 27 pediatric deaths can be attributed to influenza for the 2019-20 Season. Eighteen (18) of them were from influenza B viruses, with all five (5) of the ones with determined lineage, B/Victoria.  Nine (9) of the deaths were from influenza A viruses; the four (4) that had subtyping were all A(H1N1)pdm09 viruses.

Flu Reports in Canada for Weeks #51 & #52 were not published by PHAC plan. Reports pick back up again 1/10/20.  However, according to the Public Health Agency of Canada (PHAC) Respiratory Virus report, the graphs looked at from a national perspective indicate that influenza activity continued to increase with about an equal amount of influenza A and B.  Individual Provinces and Territories may present a different picture.  For more specific information use this link:
https://www.canada.ca/en/public-health/services/surveillance/respiratory-virus-detections-canada.html

European Center for Disease Prevention & Control – Flu for Week #52 (12/23 – 12/29, 2019):
Although not all Member States (countries) reported, Influenza activity continued to increase across Europe with some countries reporting increased intensity and spread, although most still reported rates at or below baseline.  For the sixth week in a row, specimens tested positive for flu, for those going to sentinel PCPs for ILI and ARI, at greater than 10%.  The majority of flu cases were from Influenza A (62%), a decrease from 75% in Week #50, although a number of countries reported more cases of influenza B, or a mixed dominance of both A and B.

IN THE NEWS Finally, after a year, almost all the news about measles is good.  Case numbers were way down in... read more

Download PDF The GlobalTimes reported today that China has downgraded the response to H7N9. There continues to be no evidence of... read more

IN THE NEWS This information is being published only for awareness because there has been confirmation that a small outbreak of... read more

For week #51 (ending 12-22-18) the CDC reported that influenza (Flu) activity, which includes diagnosed flu as well as ILI... read more

Download the below information in PDF form Update Since my last writing on Zika, there have been new developments. Multiple cases of... read more

Executive Summary: On 6/1/20, the WHO announced a new outbreak of Ebola in the Northwestern part of the Democratic Republic of... read more

Omicron, the latest Variant of Concern, has become dominant in the U.S. and is gaining on the Delta Variant in... read more

Continuing forward from our recent COVID-19 Webinars, “A National Conversation” where we gather brief “snapshots” of current provincial and/or national... read more