Although Flu and ILI was still elevated above the national baseline, they each continued to decrease last week.  Week #13 was the seventh week with decreases in FLU/ILI indicators.  The peak of the season occurred during Week #5, ending 2/3/18. For the first time since Flu season ramped up, the adult death rates from pneumonia and flu fell below the epidemic threshold.
On average for the past five Flu seasons, ILI remained at/above the national baseline for 16 weeks; 20 weeks was the longest.  This is the 19th week this Flu season, that ILI has been at/above baseline, which correlates with the highly active season experienced.  Flu and ILI activity is likely to remain elevated well into April and the CDC announced it may continue into May.

For the most recently reported week ending March 31, 2018, the CDC reported:

–ILI visits to clinics and other non-hospital facilities decreased again but remained above the baseline at 2.4% (was 2.5% last week); the baseline is 2.2%.  Seven (7) out of 10 Regions reported ILI at or above their region-specific baselines with 39 of 54 jurisdictions again reporting “ELEVATED”.  Region 2 (New Jersey, New York, Puerto Rico, & the Virgin Islands), Region 6 (Arkansas, Louisiana, New Mexico, Oklahoma, & Texas) and Region 8 (Colorado, Montana, North Dakota, South Dakota, Utah & Wyoming) were listed as “NORMAL”.

–Flu cases (documented by positive Flu tests) decreased again but remained elevated with widespread flu reported in 11 states, down from 16 states last week; Guam, Puerto Rico and 26 states had regional activity.  Clinical lab testing for influenza was positive for Flu in 15.4% of the total tests (compared with 14.7% last week). There may be occasional slight upticks, like this on, but a decreasing trend should continue.

–Vaccine Coverage:  Using reported data from Nov 2, 2017 through Feb 3, 2018, the CDC published an early vaccine effectiveness report on Feb 16, indicating that the 2017-2018 Seasonal Flu vaccine reduced the risk of having to go to a health care provider for Flu by 36% overall.  Specific vaccine effectiveness (VE) breaks down as follows:  H3N2 was 25%; H1N1 was 67%; and for the circulating B viruses was 42%.  A complete vaccine effectiveness report, using all the data from this season, will be published in September, 2018.
With several more weeks of elevated Flu activity expected, it is still recommended that anyone who has not received flu vaccine this season, and without contraindications, get vaccinated ASAP.   This is recommended since even it if doesn’t prevent the flu in everyone, the length and severity of the Flu would likely be lessened as well the time when a person is able to infect someone else.

Death rates for pneumonia & influenza in adults decreased again to 7.1% (7.7% last week) which, for the first time during this active flu season, fell below the epidemic threshold of 7.3%. Note: death reports often aren’t submitted for data purposes in the same time frame as Flu and ILI cases are, so they lag behind most other Flu reporting.  These numbers are from Week #11, ending 3/17/18.

There were 5 more pediatric deaths from Flu reported in Week #13, for a total of 142 for this Flu season.

—Flu in Canada and Europe for Week #13:
According to the Public Health Agency of Canada (PHAC), influenza activity remained elevated in many areas although it peaked in mid-February.  Positive tests for Flu are decreasing steadily.  The majority of the diagnosed flu cases, hospitalizations, and deaths remained in those 65 years and older.
For more info see:  https://www.canada.ca/en/public-health/services/diseases/flu-influenza.html

The European Center for Disease Prevention & Control (ECDC) published that all countries reported low or medium activity for respiratory infections.  Flu viruses circulated in the Region; lab tests from PCPs were positive for Flu 35%of the time.  A and B Flus were co-circulating with more B than A.  A and B Flus were found in those admitted to ICUs with the majority of severe cases due to Influenza type B and in those 15 years and older.
For more info see:  https://www.flunewseurope.org/

There are many websites that may be helpful in planning and managing seasonal flu within First Responder organizations.  There is a list of various links in a document called Seasonal Influenza Resources.
Two of those websites are included here:  https://www.cdc.gov/flu/weekly/usmap.htm  and https://www.healthmap.org/en/ 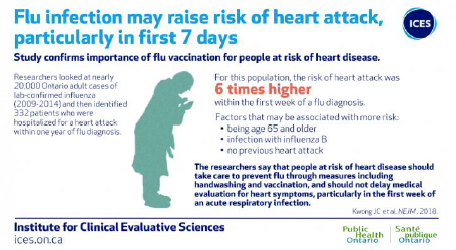 Executive Summary: Although most eyes are laser-focused on the COVID-19, Flu activity remains a far greater threat to North America and... read more

Executive Summary: Although most eyes are laser-focused on the 2019-nCoV, Flu activity remains a far greater threat to North America and... read more

For week #52 (ending 12-29-18) the CDC reported that influenza (Flu) activity, which includes diagnosed flu as well as ILI... read more

Download PDF  The CDC sent out a health advisory on December 3, 2014 regarding the potential for a poor match... read more