The CDC released a new update of confirmed cases and PUIs (persons under investigation) for AFM through 2/18/19.  With five (5) new confirmed cases reported for 2018 included, it brings the total number of 2018 confirmed cases to 215, which are part of the 371 reports of PUIs to the CDC.  This number is the largest number the CDC has reported since CDC tracking, compilation and reporting began in August of 2014.

Local and State Health Departments, in conjunction with treating experts (typically neurologists/infectious disease) from hospitals with PUIs/cases, and following a specific case definition, are charged with identifying AFM cases, doing appropriate exams, labs, and imaging, and reporting the cases, findings, and any appropriate specimens to the CDC.  These numbers are only those cases that were reported and confirmed by the CDC.  Therefore, some cases may go undetected by local health care providers and not be counted, or found and counted during retrospective review, allowing for changes in the data outside of a typical reporting period.  2018 may still have more confirmed cases added if any PUIs are ultimately confirmed by the CDC, and any given number may under-represent the actual number of cases since some may be missed or diagnosed differently.  Individual states can decide if they want to publish information about their cases beyond what they report to the CDC.

So far for 2019, there have been 11 PUIs reported to the CDC with one (1) case confirmed of AFM from North Carolina.  The CDC, along with local and state health departments, are continuing to assess the PUIs against the case definition and its criteria.

AFM is an illness with an onset of acute flaccid extremity weakness that can lead to paralysis, which can progress to other muscles of the body.  Almost all the cases are in children and in more than 90% of cases, the patient reported a mild respiratory infection or fever before developing the AFM.  Most recover fully (regain normal movement of the affected extremities/other muscles) but some will have residual weakness, and a few may need continued respiratory report.  There have been few deaths reported.  Most individuals, including children, have respiratory infections or fevers and never develop AFM.  So far, there has been no success in determining what causes the very few who develop AFM to do so.  What is known is that it is not polio.  All patients with AFM have been tested for poliovirus and all have been negative.  In some, there have been a variety of different viruses identified from nasal or respiratory swabs in some of the those with AFM, but only 4 out of a total of 452 confirmed cases had detectable viruses in their spinal fluids, namely EV-D68 (a virus that was co-circulating during the initially identified outbreak in 2014), EV-A71 and Coxsackievirus A16.  Other causes are also being investigated.

Most patients develop AFM between August and October.  There have been cases confirmed every year since 2014, but there has been a distinct difference in the number of cases between even and odd years.  Specifically, the cases in even years number over 100 per year, while in odd years, numbers are in the low double digits.  2019 will be in interesting year to evaluate for numbers since 2018 had the largest number of cases since tracking began.  Cases have been reported in 48 states and Washington DC, as well as a number of other countries.

What First Responders Can Do:
Since there is no pathogen-specific PPE guidance, Health Care Workers, including First Responders, should use Standard plus Contact plus Droplet precautions when responding to alarms that may be AFM and certainly when assessing, treating, or transporting these patients (based on CDC recommendations for EV-D68).  Decontamination with an approved disinfectant should be used to decontaminate all potentially contaminated equipment that is not single use (which should be discarded in biohazardous bags).  Consider an area of 6 feet around the patient, at any given time, potentially contaminated, particularly if the patient is coughing, sneezing, singing, or talking or if droplet-producing procedures are performed (i.e. nebulizer, BVM, suctioning, intubation, etc.).  https://www.cdc.gov/infectioncontrol/basics/transmission-based-precautions.html and https://www.cdc.gov/infectioncontrol/guidelines/isolation/index.html

Consider developing a common practice for managing possible AFM cases, in conjunction with the Medical Director and Administration, regarding assessment and transportation of these patients.  To insure the patients’ safety (they are most often children) and so that proper assessment for AFM can be done, consider transporting all these patients to an appropriate ER/ED, where comprehensive assessment and management can be completed.

More in-depth information can be found in earlier FirstWatch documents on the Health Intelligence Page. 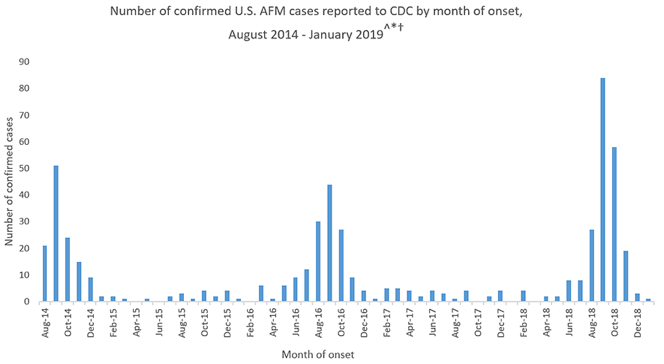 During this week’s interactive webinar, which is the 13th COVID-19 Webinar of our series, we summarized the timeline and... read more

For week #08 (ending 2-23-19) the CDC reported that Influenza (Flu) activity, which includes diagnosed flu as well as ILI... read more

A patient who normally lives in the Middle East, but traveled to England on Saudi Arabian Airlines Flight# SV123,... read more

The two mRNA vaccines have been out for more than a month and 4,263,056 individuals have already completed their... read more

IN THE NEWS Executive Summary: The CDC and NIOSH have reported counterfeit respirators being sold on the open market with various... read more

Continuing forward from our recent COVID-19 Webinars, “A National Conversation” where we gathered a brief “snapshot” of current provincial... read more

Executive Summary First responders have a critical role in prehospital emergency care and must continue to provide this essential... read more