As you are no doubt aware from the media, there is an outbreak of Ebola in the Democratic Republic of Congo (DRC).  There are no cases in the United States or in any country aside from the DRC. The World Health Organization’s Emergency Committee met May 18th and decided that the outbreak should not be considered an International Health Event, at least at this time, but is of concern and will be closely monitored by WHO, CDC & other international agencies and partners.  Doctors Without Borders (MSF), the considered experts on identification, confinement, and treatment, are managing all the outbreak sites along with the Health Ministry of the DRC.  There are occasional outbreaks of Ebola and other hemorrhagic fevers in one place or another in Africa (they are considered endemic) but are usually small and well controlled and do not make the news in most cases. This outbreak covers several outbreak sites but is still considered small and manageable.  As of May 30, there are 51 cases of Ebola with 35 confirmed, 13 probable, and 3 are suspected.  Some previously suspected cases have tested negative for Ebola and counts have been adjusted down as that happens.

This list of Resources with links is provides In an attempt to make this updated info available more quickly,... read more

Download the below information in PDF form Influenza 2015-2016 On Feb 1, 2016, the CDC published a notice that the Influenza... read more 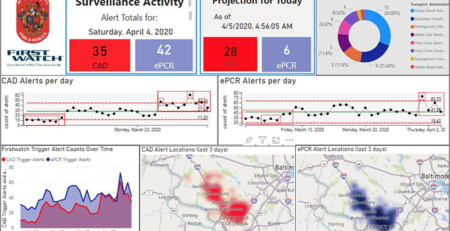 As of September 19, 2019, the WHO Regional Office for the Eastern Mediterranean reported only one (1) new case... read more

IN THE NEWS Ebola Outbreak June 8, 2018 Although the CDC has not posted updated numbers since the May 18th Notice,... read more

IN THE NEWS The emergence of a novel disease is always a rapidly changing situation and FirstWatch will attempt to... read more