Continued good news about Flu but there are still a couple of indicators that have yet to fall, namely, the rate of hospitalizations from flu, as well as the number of pediatric deaths.  However, for the third time in-a-row since the third week in November, influenza activity (ILI) was below the national baseline and the number of flu cases once again decreased.

This chart, copied from the CDC Weekly U.S. Influenza Surveillance Report, provides an excellent way of comparing this flu season with others, starting from 2009-2010.  The silver line represents the 2009 Pandemic of H1N1 and the red line outlines the current 2017-18 Flu Season.  The legend to the right of the graph lists the other seasons. 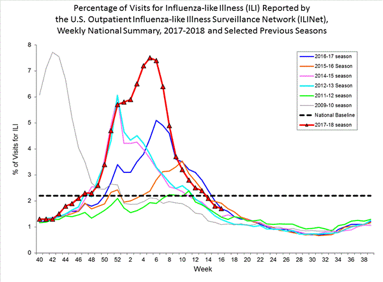 For the most recently reported week ending April 21, 2018, the CDC reported:
–ILI visits to clinics and other non-hospital facilities decreased again and was again below the baseline of 2.2% at 1.7% (was 1.8% last week).  For the second week in a row, only Region 1 (Connecticut, Maine, Massachusetts, New Hampshire, Rhode Island and Vermont) was listed as “ELEVATED.  All other Regions were listed as “NORMAL”.
–Flu cases (documented by positive flu tests) decreased again but remained elevated with widespread flu reported in 4 states.  “NO ACTIVITY” was reported by Alabama and Mississippi.  Clinical lab testing for influenza was positive for flu in 8.9% of the total tests (compared with 10.9% last week). Influenza B remained the dominant flu type with 69.4% of the positive flu tests reported.  The remainder of the positive flu tests were Influenza A at 30.6%.

The CDC provides an interactive U.S. map that will link to each state’s public health authorities, ILI and flu information and processes, as well as other diseases and public health topics.
Find it at this site:  https://www.cdc.gov/flu/weekly/usmap.htm

—Flu in Canada and Europe for Week #15:
According to the Public Health Agency of Canada (PHAC), most influenza activity indicators decreased although some areas are still reporting localized activity.  All flu indicators decreased or remained the same.  Positive tests for flu remained greater for Influenza A than B.  The majority of the diagnosed flu cases, hospitalizations, and deaths remained in those 65 years and older.
For more info see:  https://www.canada.ca/en/public-health/services/diseases/flu-influenza.html

The European Center for Disease Prevention & Control (ECDC) reported that flu activity was at levels seen between flu seasons except in one country.  Lab tests from PCPs were positive for flu 12% of the time with more Influenza A than B currently co-circulating; the majority of the cases were Influenza A.
For more info see:  http://www.flunewseurope.org/

For week #04 (ending 1-26-19) the CDC reported that Influenza (Flu) activity, which includes diagnosed flu as well as ILI... read more

In the News: HAN Influenza Advisory

CDC has released a Health Advisory from their Health Alert Network:https://emergency.cdc.gov/han/han00409.asp Due to the rapid rise in cases of flu... read more

For week #49 (ending 12-8-18) the CDC reported that influenza (Flu) activity, which includes diagnosed flu as well as... read more

Influenza (FLU) Update for Week #13 Week Ending 3-31-18 Although Flu and ILI was still elevated above the national baseline,... read more