The Data:*
According to the CDC, from January 1st through May 24, 2019, there have been 940 confirmed cases of measles in 26 states within the U.S.A. (compared to 127 cases as of February 14, 2019), with an increase of 60 cases in just the past week.  This jettisons this year’s cases to the highest number since the decade before (1994) Measles was considered eradicated, which was 2000.
There are currently 10 outbreaks of Measles located in seven (7) states: multiple areas of New York State (Rockland County, Brooklyn & Queens); two areas of Washington State (King. Pierce & Snohomish Counties); multiple areas in California (Sacramento, L.A. & Butte Counties); Michigan (Oakland & Wayne Counties with one in Detroit); Pennsylvania (Allegheny County); and, to complete the list, Georgia and Maryland.
There are also other states reporting confirmed cases that number less than three (3) in an area, so they are not considered outbreaks but individual cases.  Due to the infectiousness of measles (its ability to spread/transmit from person to person), more outbreaks may be identified by the CDC in the future, with the reporting of cases from Local and State Health Departments.
The other 19 states that have reported measles cases, as of May 24, 2019, are Arizona, Colorado, Connecticut, Florida, Illinois, Indiana, Iowa, Kentucky, Maine, Massachusetts, Missouri, New Mexico, Nevada, New Hampshire, New Jersey, Oklahoma, Oregon, Texas, and Tennessee.
Some states and individual areas/counties within states have instituted varying vaccination requirements, with several not allowing the opting out of MMR vaccination based on religious or philosophical reasons.  Other changes to vaccination protocols have been made, per public health officials in a given area, that include adding a booster MMR, shortening the interval between MMR vaccinations to achieve greater immunity more quickly, and/or an adjustment to widen age recommendations.  Some authorities have levied fines, some day schools have been closed until compliance with vaccinations occurred, and some college dorms and students have been quarantined until vaccination or immunity can be confirmed. These changes were put in place to decrease the chance of transmissions between those who are un or under vaccinated, including those that are too young or who cannot be vaccinated because of a valid medical reason, which is typically immunocompromise from various causes.
* Please refer to the CDC Map and Chart located at the end of this post.

The Sequela:
Most of these cases are associated with travel, either with those infected visiting the U.S. or from U.S. citizens or residents that travel to an area with measles, are exposed, become infected, and then travel home.  Once in the US, it can spread amongst those that are not adequately vaccinated, including in communities where a at least 5-15% have not been vaccinated (or the vaccination has waned).  Many of the exposures occur before the measles have become obvious, since there is a period when a person is infectious (can spread the disease) but does not have a rash for up to four days (and then are still infectious for 4 days after the rash appears).  There are other symptoms and signs, but other than the Koplik spots, they can mimic other illnesses like a cold, allergies, conjunctivitis or other upper respiratory illnesses.  If anyone is exposed to someone with the measles, there is a 90% chance they will also get the measles if not adequately vaccinated. If an infected person sneezes or coughs, the droplets that result hang in the air, and stay capable of spreading the disease for two hours.

Measles is not just a simple, natural childhood disease as some believe.  Instead, per the CDC, even with good medical care, it carries a risk of complications, and some of them are quite significant including serious neurological effects like encephalitis, that can lead to permanent brain damage (1 per 1000), pneumonia (1 per 20), and even deaths (1-2 per 1000) from respiratory or neurological compromise.  Other serious effects include learning disorders, vision loss that may even cause blindness, hearing loss that may even lead to deafness, and a rare degenerative neuro disease that does not appear for 7-10 years after the measles case.  Common complications include otitis media, bronchopneumonia, laryngeal-tracheal bronchitis, and diarrhea.  The very young (under 5), those older than 20, pregnant, or immunocompromised individuals are at greatest risk for these complications, but they can and do happen to anyone.  As of April 26, 2019, 9% of all the measles cases for 2019 have been hospitalized with complications, although the data on measles suggest that the rate can be as high as 25%.

To put all this in perspective, according to the CDC, before there was measles vaccination in the U.S. (1963), there were 500,000 cases of measles reported each year, with 48,000 patients hospitalized, 1000 cases of encephalitis, and between 450-500 deaths.  Per year, every year !   Measles remains a major cause of death and disability in developing and underdeveloped countries.

See the article posted on this page under this same category of Outbreaks/Emerging Diseases and named Measles (Rubeola) February 20, 2019, for more specifics on the disease, implications and recommendations for First Responders.

Clink on these CDC links for specifics:
Info about the 2019 Outbreak:
https://www.cdc.gov/measles/cases-outbreaks.html

Info about Complications of the Measles:
https://www.cdc.gov/measles/about/complications.html 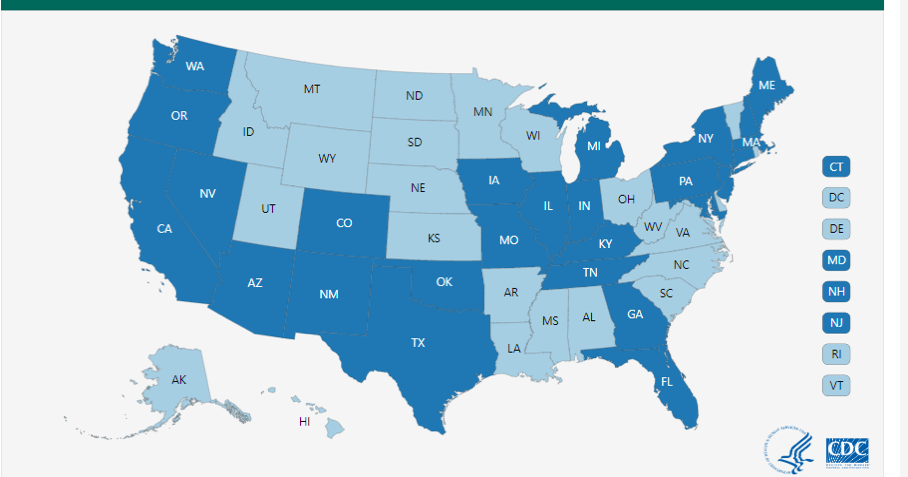 Map and Chart copied, with gratitude, from the CDC Measles Outbreak Website https://www.cdc.gov/measles/cases-outbreaks.html

Since the onset of the disease that would be named COVID-19, there have been questions about how it's transmitted... read more

The Johnson & Johnson's (J&J) Vaccine started distribution this month and has been used at vaccination sites throughout the... read more

A new COVID-19 resource page on EMS.gov provides easy to find links to the most relevant and up-to-date information... read more

A patient who normally lives in the Middle East, but traveled to England on Saudi Arabian Airlines Flight# SV123,... read more

IN THE NEWS As of August 22, 2018, the number of those diagnosed or suspected of having Ebola Virus Disease... read more

For those who have seen the tragedy of first responder suicide up close, or heard about it, they know... read more

For week #11 (ending 3-16-19) the CDC reported that Influenza (Flu) activity, which includes diagnosed flu as well as ILI... read more